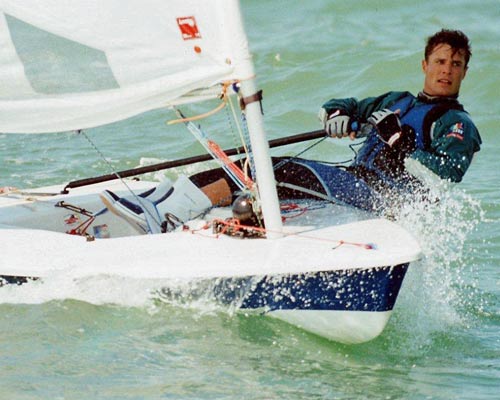 Kurt is an experienced sailor specializing in Laser sailing, a 14 feet, one man Olympic-class dinghy. Kurt was born in Buffalo, NY, grew up sailing on the Niagara River, and was a member of the Niagara Sailing Club for many years. Since 1977 he has competitively sailed a variety of boats including Sunfish, Laser, Finn, Hobie 16, Albacore and lightning. For several summers he campaigned as crew on a C&C 38 (taking many top honors) on Lake Ontario. He has 2 gold medals and several others from the New York State Empire Games. Kurt has completed Laser campaigns for the Savannah, Sydney, Athens and Beijing Olympic Games. These campaigns have taken him to many countries including Chili, Australia, New Zealand, Ireland, Netherlands, Denmark and Spain. He has also traveled extensively to the Pacific Coast, Atlantic Coast and the Great Lakes area. He has been a member of the US SAILING Team three times.

Kurt started SAILFIT in 1994 after graduating from the University at Buffalo with a Masters degree in Engineering Management. His undergraduate degree is in Electrical and Computer Engineering. Instead of pursuing a corporate career he created a business around sailing that gave him the opportunity to sail and earn money. This allowed him to travel for regattas and training and to continually make progress in his sailing. Kurt has been teaching sailing seminars and clinics for over 15 years. He is the coach for the SailFit Laser and SailFit HomeSchool Teams.

In 2003 Kurt married his wife Meka. The two met at the bank where Meka was working and because Meka was doing some big boat racing and grew up in a sailing family with parents that live aboard, a connection was made immediately. Kurt and Meka set off at the end of 2000 on a non-stop campaign for the Athens Olympics in 2004. They traveled extensively for the campaign and eventually found themselves in Clearwater, Florida. Since Meka had been training for fitness competitions it was a natural step for her to become a certified trainer and train sailing athletes.  Meka puts the fitness into SAILFIT.

Currently, Kurt is living in Dunedin, FL with Meka, their three children. Kurt is coaching the sailing teams, teaching seminars and clinics, giving lessons from beginner to advanced sailors and still working on his own sailing game.